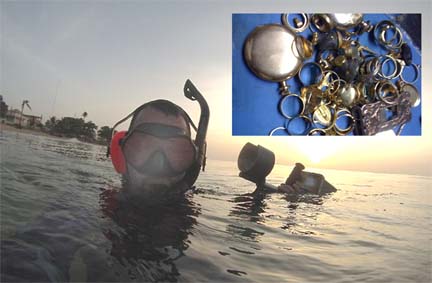 Many scuba divers are discovering the fun and excitement underwater metal detecting can bring to their diving. Taking a detector along on a dive turns it into a completely new experience. Even divers that have "done it all"; underwater photography, spearfishing, rebreathers, scooters, etc, are surprised with the thrill they get finding things with a detector. As one diver joyously exclaimed, "It doesn't take a gold bar to get the adrenaline pumping, any discovery feels like treasure. It's like an Easter egg hunt!"

Puerto Rico has a long rich history and is often referred to as "land of the pirates". It was "discovered" by Columbus on his first voyage to the new world in 1493. From the 16th century on, it became a strategic base in the power struggle for control of the Caribbean. By the 18th century the island had become a haven for pirates and smuggling was a major activity. Naval battles throughout the centuries, along with many fierce huricanes that hit the area, have left the seafloor around Puerto Rico littered with shipwrecks. Today locals still search for pirate booty along with "treasures" lost by visiting tourists. People come to the island to enjoy the sunshine and beautiful beaches, however many go home with less than came with. As one man aptly put it; "tourists come to the beach, slather their bodies with suntan lotion, put on every piece of jewelry they own, then jump in the ocean where it all falls off and gets lost." Some enterprising divers, like Anthony Morales, scan the sandy bottom with an underwater metal detector and recover loads of jewelry, rings, and coins. Anthony's detector of choice is JW Fishers Pulse 8X. He says, "I love my detector and tell friends; buy a metal detector and you'll find metal, but get a Pulse 8X and you'll have treasures in your hands!"

One of the great features of an underwater metal detector is its ability to work above and below water. Some detectors, like the Pulse 8X, come with all the accessories needed for land and underwater detecting, making them two detectors in one. Canadian Don Marshall loves to hunt the beaches and shallow water of area lakes with his Pulse 8X. He searches for anything the summer tourists may have dropped, but his primary focus is rings. Don says, "Of the thousands of people who have flocked to our beaches, chances are a least a few of them have lost prized jewelry. With the detector in one hand and sand scoop in the other, Don wades slowly through the water listening from the weak signals given off by small targets like rings and jewelry. Although he has only been detecting for about 3 years, Don has made some nice finds including several rings he returned to their owners. One was a platinum heirloom engagement ring lost in the grass at the University of Victoria, another was a wedding ring lost in shallow water by a woman playing with her kids at the beach. When he finds a new ring, he'll advertise it on Craigslist or Used Victoria to try and locate the owner.

Don says there's plenty to find where the beach meets the water line, but mostly he prefers to wade just offshore in water up to neck deep. He doesn't worry about the detector or headphones getting wet, an advantage of a true underwater detector. He carries a scoop and has a floating sieve to separate targets from mud and sand. He originally bought the detector as a way to keep busy in his retirement. "It was a situation of needing something to do to keep me out the bars", Don says with a laugh, "but it's turned out to be a great hobby that pays for itself!"

Al Hartman also enjoys hunting beaches and land sites with his Pulse 8X. Recently he helped researchers with Florida State University and state archaeologists search a Civil War battleground. The Battle of Natural Bridge was fought in March of 1865 and proved to be a significant event in the war. A small band of Confederate troops and volunteers, including teenagers from the Florida Military and Collegiate Institute (now Florida State University), kept Union forces from crossing the Natural Bridge over St. Marks River. This action prevented the Union from capturing Tallahassee, making it the only Confederate capitol east of the Mississippi not to fall during the war.

Hartman reported, "The finds we made at the sight were amazing". We found canister shot, mini balls, grapeshot, musket balls and lots of other artifacts. As each target was located, we measured the depth it was buried, marked the location with a flag, and got a GPS position of the spot. Researchers will use all of the collected information to recreate the battlefield. Al went on to say, "Detecting at the site was a moving experience. You could picture in your mind what the fighting must have been like on that terrible day with men falling on both sides. But I was happy I could help the archaeologists in their efforts to piece together what actually happened on that fateful day."

A few of the many other divers that have made valuable finds with their Pulse 8X detectors are Ed Rosacker at Divers Cove in Connecticut, Bill Nichols of Timber Bay Sport & Dive in Wisconsin, Capt. Charles March in Panama, Jose Luis Garcia in Ecuador, Canadian Larent Latiegne, Dave sullivan in Antigua, John Cottrell in Connecticut, Jon Morgan in Florida, Randy Miller in North Dakota, Nelson Jecas in New Jersey, Ken Johnson in Wisconsin, Pedro Martinez in Arizona, and Mike Drainville in Massachusetts.